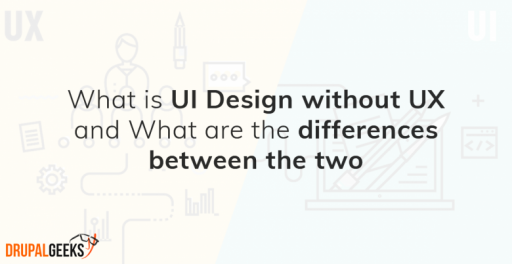 More and more, UX designers realize that they also need UI design skills. The reasons for this are somewhat straightforward. For those of us who are less tech-savvy, UX design (user experience design) is the process that's able to identify a user's pain point. Once you discover this pain point, a rough draft is created, which will later validate through testing.

UI design (user interface design), on the other hand, is the sum of both visual design and interaction design. And while visual design refers to how the site looks and feels like, interaction design works on how people interact with your website. Even though both UX and UI designers work with interactions, one can better differentiate the two by seeing UI design as dealing with the details while UX with the macro elements.

In other words, the UX designer will create the steps that a site visitor will take to make a particular action, after which the UI designer will take over. He or she will polish those interactions by adding colors or other such elements that will further help the user to navigate the site.

UX designers will also have to do competitive analysis and develop customer personas, after which they will start producing a rough product to address those issues. This entire process will then validate via testing over the entirety of the product's lifecycle. If it passes the test, the product will reach UI design.

The UI designer's job is to refine the product and make it aesthetically pleasing. But the elements added are not based on the designer's preferences. Colors, typography, fonts, and other such features will be dictated by the customer personas and analysis researched by the UX designer.

UI designers will then create a visual hierarchy which will be used as a guide for users when they are on the site and what they will have to accomplish at any given moment during their interaction.

As mentioned before, UX design preoccupies itself with determining what people want and need from the product. Everyone comes to a website with a purpose, after all, and its the UX designer's intent to determine what that is. It can be done in many ways, be it through questions, observations, interviews, and prototypes. Once the usability is right - UI design steps in.

The purpose of the UI design in this context is to give the interface a personality and elicit a positive emotion from the user. Once this happens, loyalty is sure to come. Will the interface make the users laugh or be impressed in one way or the other? If the answer is yes, then UI design has done its job.

UX design is a broad field that's becoming even more immense. As it turns out UX design will not only be for those who have a website or an online presence, but also for those who develop various products or provide services. All of them need to understand their target audience and design their products and services by those customers in mind.

UI design, however, is limited only to the user interface. But like is the case with UX, UI design does not imply just a digital device's interface. Many other products of today have an interface, be it smartwatches, washing, and vending machines, and the list can go on. UI design is required for all of these.

But to answer the original question "What is UI design without UX?" we will have to say that it's the second step in an all-encompassing strategy to create a workable and user-friendly product. In the end, you can't have one without the other, the reason for which UX designers also need to know how to handle UI design.