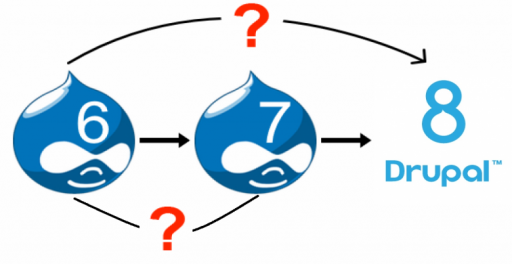 In this article, we will witness the risks and costs involved in the selection of Drupal version. Now, we have put an end-board for the site of Drupal 6. Nowadays, owners are not aware of the version to choose, which suits their business. Here is a small insight for selecting the right version.

The first question is should I move from,

Precisely, these are the only ways when we look at Drupal 6 latest version migration

Choosing between the two versions depends on functionality, complexity, requirements, and time frame. The good news is that Drupal core 8 already includes migration path from D6 to D8 for some of the entities in Drupal, not all like views, etc.

If you are on D6, our migration experts can help in conducting site analysis, suggest you the right approach, and help you to either leap forward to D8 or stay with D7.

D8 is different from D7 with regard to architecture, and a standard upgrade is no longer possible. Though it comes with a streamlined migration framework in the core; however, some elements such as themes will not migrate and there is no such migration path, because D8 is using different template engines.

These elements will have to be re-engineered to leverage the benefits of D8. If you are using D7,

Drupal Geeks will prepare your systems for migration and consult our IT and marketing teams to efficiently leverage Drupal 8.

Drupal 8 stable release 8.0.0 is released on November 19, 2015. It has been three months since its release, and it is getting its shape every day. It is a learning curve for all the developers, since many architectural changes have been done in Drupal 8,  such as using Symfony and Twig template Engine.

1.    Brochure sites: For brochure sites, we do not want to port to D7 because we can straight away take a long step to Drupal 8 since we  do not need to depend on the contributed modules or any custom modules anyway, as it is only a content site. Drupal 8 Core is handling content and it is more than enough for us to bring the site that will be cheap again. Cheap in the sense that the amount of work knowledge involved in porting is less complex and the only important work in migrating relies on the template. The risk involved is also relatively less when it is a content-only brochure site.

2.    Less complex sites: They have few functionalities and customization required, and it is dependent on the contributed modules to be ported from the previous version to Drupal 8. Now that all the developers started porting their own modules. If a site has 100 contributed modules only 40 of it is ported so other 60 modules need effort of the developer which in turn is costly which requires more time.

3.    More complex sites:  E-commerce websites are the more complex websites, which involve more effort, cost, and related modules are in transition path. Let us take Drupal Commerce module, which is the Drupal’s best commerce and mostly used module. It is being ported now in Drupal 8 and it is in 8.x-2.0-alpha3 version and ready to rock in the E-commerce world of Drupal soon. It comes with a sophisticated functionality, which provides solution for most of the E-commerce problems. Now, it is not the right time to take a step forward. We have to wait till the release of these E-commerce modules.

Drupal 6  End of Life announcement  all the Drupal 6 owners started moving out from Drupal 6.
and now that Drupal 8 is released most of the website started migrating from Drupal 6  to Drupal 7 or Drupal 8 depending on the complexity of the website. Now most of the site are using Drupal 8 see Usage statistics for Drupal core  Already 67,827 websites are ported in D8.  So it's your turn to take the next step forward.

Risk being in Drupal 6

1.    Drupal 6 version  will no longer be supported by the Drupal community.
2.    The community will no longer be contributing modules, fixing issues in the existing projects, and writing documentation, etc. around Drupal 6.
3.    The security team will no longer provide support or Security updates for Drupal 6.
4.    All Drupal 6 releases on project pages will be marked as not supported.
5.    At some time in the future update status may stop working for Drupal 6 sites.
6.    No more core commits will be there on Drupal 6.x to the official tree.
7.    Hosting providers dropping support PHP 5.3
8.    Your site is not up to the trend and make use of new features provided by Drupal 8

How we can help you?

For a thorough assessment and professional guidance on upgrading your Drupal website, Drupal Geeks can be reached out @ 312-340-7112 or send an email to [email protected]