Thinking whether to migrate from Drupal 7 to 9 or Drupal 7 to 8 to 9? Here’s expert advice.

Since the launch of Drupal 9, many users are confused about whether they need to switch to Drupal 9 right away or upgrade to Drupal 8 and then move to Drupal 9?  Here, we state the pros and cons of both and help you make the right decision. 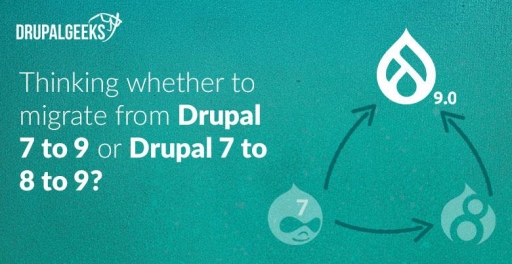 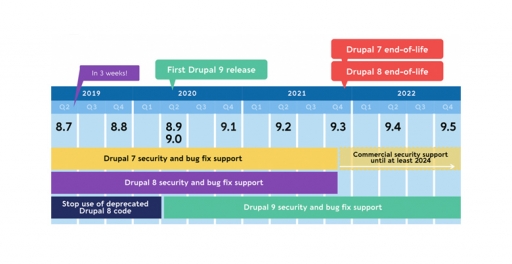 Switching from Drupal 7 to Drupal 9

As the majority of the Drupal users are still running on Drupal 7, most would think of upgrading straight away to Drupal 9 as it would reduce cost and time. However, it has some problems too.

Since Drupal 9 is recently launched, it will take some time for the marketplace to create enough modules. Hence, if there are any errors posted, the Drupal 9 upgrade from Drupal 7 cannot help you date back to Drupal 7, whereas with Drupal 8 the same is possible.

As the Drupal 7 support ends by end of 2021, you need to plan your upgrade quickly else your website can be vulnerable to security threats.

The official press release of Drupal 9 states, ‘The big deal about Drupal 9 is … that it should not be a big deal. The best way to be ready for Drupal 9 is to keep up with Drupal 8 updates.’ So, if you are on Drupal 8, switching to Drupal 9 is seamless and not a big deal.

Drupal 8 comes with Symphony 4 and Symphony 5 upgrades and Drupal 9 also gets it as a part of its core upgrades. This reduces time and effort when you upgrade from Drupal 8 to Drupal 9.

One of the problems with Drupal 8 to Drupal 9 would be the removal of deprecated codes. Older codes will be marked as deprecated by Drupal. However, our Drupal team has a list of deprecated codes in place to help remove the same for our existing customers and create new modules by avoiding them.