Chatbot testing is not as difficult as it may seem 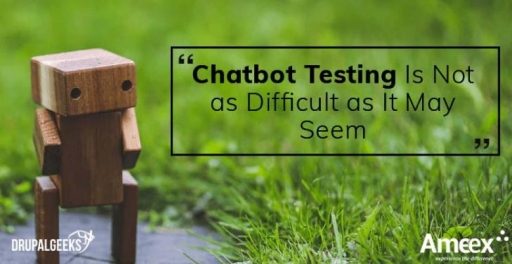 Chatbot testing is in high demand ever since chatbots have taken customer interaction by storm in recent years. Businesses, big and small, have been implementing chatbots as a means of engaging end-users, driving customer experience and gathering data such as customer behaviour, past purchases, and other such habits. It has long been established that chatbots are more than messaging, the reason for why they are in such high demand.

Nevertheless, being able to hold a conversation is something that every chatbot needs to be able to do, and chatbot testing is the way to ensure that. However, building a chatbot testing strategy requires a lot of hard work and time. But do not let yourself be fooled into thinking that it's not something doable. Here are the first steps that need to be taken to achieve one such strategy.

At the highest level, we have UI/UX testing. At this stage, you will be testing the entire system, including all dependent systems, as well. It's good to remember that a chatbot has a somewhat simple interface - either a spoken or a written language. When we are talking about a test case in this context, we are referring to a chatbot that can hold a conversation.

To run this test manually, such as starting Facebook and begin chatting with the chatbot, is only feasible for small projects. But with test automation, however, it's possible to run testing sequences without your direct intervention. Chatbots will do most of the work while you will receive a report at the end.

The first thing you will need to check is the onboarding process. You need to make sure that a greeting screen appears every time a user opens up the chatbot option as this will allow the user to understand what's the next step that needs to be taken. From a developer's perspective, this feature requires consideration during the chatbot's development stage. As for the testers, they need to ensure that it's working correctly.

Figuring Out the Text Length

A chatbot's response needs to be concise, specific, and to the point. Most of all, these text responses should not be broken. Some channels have a word-count limit, meaning that if the text exceeds that limit, the message will be broken into multiple parts. And while this is not an actual problem, per se, it does, however, sound pretty bad.

While developers need to be mindful of these text limits on different channels and should use paging when appropriate, testers should verify whether there are no massive blocks of text or any such broken messages.

Another critical factor in chatbot testing is the bot's ability to understand context. In other words, the chatbots need to know that a user's response can be different but mean the same thing. Like, for instance, Yes/OK/Sure are all viable responses that indicate an affirmative action.

Developers need to maintain a proper context stack, while testers need to test this capability by using random words in the middle of the flow. Likewise, they should also leave the chat and return later to see whether the chatbot will maintain the same flow as before.

While these points here do not represent the entirety that comprises chatbot testing, it, nevertheless, illustrates that the difficulty level is not the same as it would be with audio app testing, for instance. If you want to understand better how to test or integrate chatbots into your system, contact us today.