Drupal 6 End of Life Announcement, Should I upgrade my Drupal website? 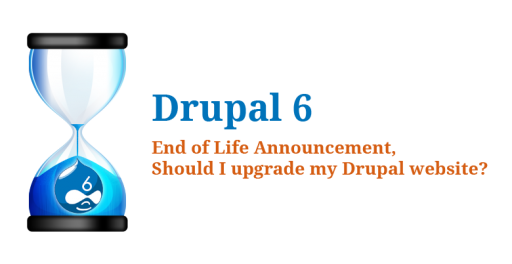 With the official release of Drupal 8 on Nov 19th 2015 coinciding with the birthday of Drupal founder Dries Buytaert, sparkling celebrations across the globe amongst the Drupal community, comes an alarming Drupal 6  End of Life announcement. Now let’s explore the options with Drupal 6 & Drupal 7 website owners who are in a need to embrace the imminent change.

What does Drupal 8 offer?

Drupal 8 with its powerful new suite of tools is focussed on overcoming the inherent complexity of the previous versions, to enable website administrators to work through hassle-free without complex configurations.

Although, it promises a lot of cool features, apart from major modules, there are a whole lot of contributed modules that still needs to be developed for Drupal 8.

Should Drupal 7 owners worry?
Drupal 7 could be around for another 4 years as per the Official Drupal release cycle,
Image 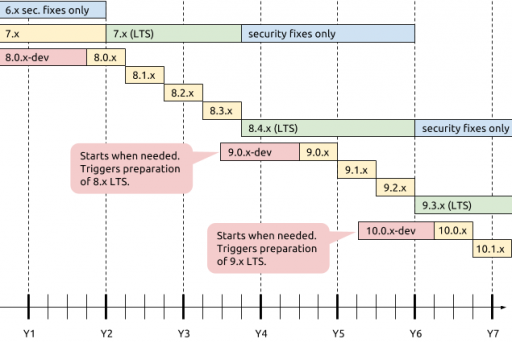 Source: https://www.drupal.org/core/release-cycle-overview
I have a Drupal 6 website what should I do?
Well! How long you can stay with Drupal 6 beyond its EOL is a question of what your website is? If it’s a simple brochure website with few pages of content manifesting your businesses’ online presence, you do not have to worry about upgrading to Drupal 8. It could be a smoother ride or a little bumpy one without pinching your budget.
If your website is made up of heavily customized modules, say an e-commerce website with lot of functionality achieved with contributed modules and customizations, you will need a careful assessment by a developer to check if you have relevant modules available on Drupal 8. The next planned minor upgrade is planned to happen by April or May, 2016
It is also a trade-off between how interested you are in being an early-adopter vs. the budget availability for the upcoming financial year.
Recommendation
Well! Knowingly or unknowingly new Drupal release has happened in a vacation season, so businesses’ has ample time to sit back relax on your vacation and ruminate over your options to decide upon giving a fresh look to your business with Drupal 7 or Drupal 8.
While deciding to go with Drupal 8, do not hesitate to reach the Drupal geekswho have already started delivering on Drupal 8 and has a readily available professional team.
For a thorough assessment and professional guidance on upgrading your Drupal website, Drupal Geeks can be reached out @ 312-340-7112 or send an email to [email protected]